The ADI-2 DAC FS and ADI-2 Pro FS R Black Edition comes with a remote that is not the usual cheap add-on. This nicely designed remote control has clearly labeled buttons, readable even in low light conditions without reading glasses, a nicely laid out button arrangement that is easy to remember, and perfect button ergonomics. Plus: It won't interfere with your ATV or other devices.

The MRC remote control provides buttons for standby on/off, volume, balance, bass and treble, input selection (optical, coaxial, USB), mute, on/off loudness, bass/treble and EQ. In addition, there are four programmable buttons that provide access for up to 52 different functions and commands for maximum flexibility. There is no other converter or comparable device with such a sophisticated, easy to use and at the same time versatile remote control! 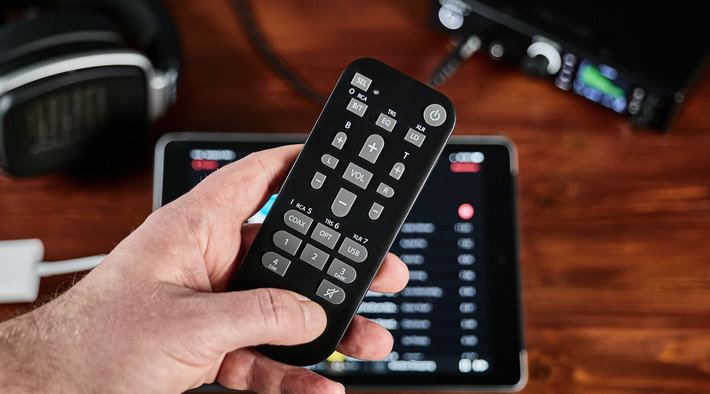 The MRC is an extended version of the previous remote, with additional buttons designed for the most commonly used functions, namely switching loudness, parametric EQ, and bass/treble on and off. In addition, there are keys for direct control of bass, treble and balance.

With these additional keys, all typically used functions of the device are now accessible directly from the remote control. The four programmable buttons 1 through 4, a unique feature also found on the original ADI-2 DAC remote, can still be programmed with a personal selection of 32 commands/actions.

Current owners of the ADI-2 DAC can also take advantage of the new MRC, which is also available to purchase separately as an accessory, so long as your device is running the latest firmware (at least version FPGA 27, DSP 33).

The RME MRC features four assignable function keys which can programmed by the user to control a variety of different commands. A total of 32 different actions can be selected, allowing you to personalise the Multi-Remote-Control to suit your HiFi or Studio setup.

Factory defaults for remote buttons 1 to 4

By default, the RME MRC's four assignable buttons are programmed to the following actions;

The following list of commands are all controllable via the MRC, when assigned to one of the four user-definable buttons;