The Fireface UCX operates in three different modes: driver-based USB 2, stand-alone mode, and Class Compliant mode. The latter describes a standard that is natively supported by operating systems like Windows, Mac OSX and Linux. No proprietary drivers are required, the device will be directly recognized when the CC firmware is loaded. Obviously, native features will be limited in comparison to those provided by the RME driver for the UCX. For example there will be no (Total) Mix and no settings for the effects.

The Class Compliant mode can be activated and deactivated by the button on the front panel at any time.

Most Class Compliant audio devices use the USB 1.0 standard, released in 1996 for USB 1.1. The UCX features USB Audio 2.0, therefore supports USB 2.0 and will be ready for future upgrades. USB Audio 2.0 offers a bandwidth performance comparable to operation with the RME drivers, and should allow the transmission of all the unit's channels. It won't be comparable to the RME drivers in terms of latency, though.

Windows does not support USB Audio 2.0 directly. The UCX will be detected, but automatic driver installation will fail.

Mac OS X supports USB Audio 2.0, even with more than 2 channels. The UCX offers 2-channel and 18-channel mode. Linux should work as well, but this has not been tested and will likely depend on the individual distribution.

Neither of these systems is relevant, though, since there are dedicated and matured drivers for both OS X and Windows, which provide ALL the device's features at lowest latencies. The main reason for implementing Class Compliant mode was to allowconnecting the UCX to any Apple iPad!

The UCX provides the iPad with the professional analog I/O connections it lacks. Superb microphone preamps with EQ, dynamics, even with the AutoSet feature, in addition to professional balanced line outputs, and a hi-power headphone output that also excels with high impedance headphones. Plus level and gain adjustments, SPDIF/ADAT I/O, reverb, echo, zero latency monitoring, digitally via USB, without any limitation in quality, at up to 96 kHz and 24 bit. And of course a Sysex-capable double MIDI I/O. All of this is both unique and the first of its kind world-wide.

- Any Apple iPad with iOS 5 or higher. iPhone and iPod Touch can not be used.

How to set up

1. Connect the UCX to power and switch it on. Turn the encoder knob in Channel mode until "SU" appears in the display. (The LED of "CH" will blinking)

2. Press the knob once to activate Level mode. ("LEV" 's LED blinking) Turn the knob to right until "CC" is shown in the display,

The unit will reboot, all LEDs will light up, after which it will be in Class Compliant mode.

4. Connect the USB cable to the UCX and the Camera Connection Kit. Start the iPad and plug the Camera Connection Kit into the Dock connector. If everything works as expected, the unit will enter CC Host mode, indicated by the HOST LED turning off. Audio playback in iTunes will automatically be performed by the UCX, using analog outputs 1/2 and the phones outputs 7/8 plus SPDIF/ADAT in parallel.

*Apps that support MIDI and are ready for Core MIDI (available since iOS 4.2) will offer dialogs to select the desired UCX MIDI inputs and outputs.

If the unit is not in in CC mode, the iPad will detect an incompatible USB device, and display a message saying 'Cannot Use Device - The connected USB device is not supported'.

When using hard covers as back panel protection for the iPad, the Connection Kit's plug may not fit completely, causing a loose connection or partial functionality. If in doubt, remove the cover.

The iPad's volume control is inactive during USB operation.

If the unit does not enter Host mode: Remove and reconnect the Connection Kit.

Correct detection and operation of the Connection Kit itself can be determined in Settings / General / About. The adapter will be listed there right after connection, with additional details like manufacturer, model number etc. Connected USB devices, i.e. the UCX will not be shown here, though. 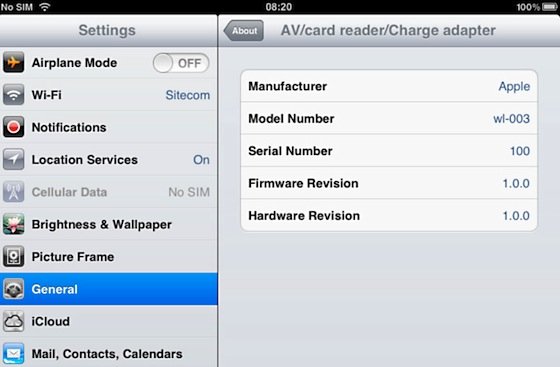 Having tested several chinese replicas of the Apple Camera Connection Kit, from 2-in-1 to 5-in-1 adapters, we strongly recommend purchasing the original for use with the UCX!

All adapters seemed to work for the simple application of copying photos. Attempting to run the UCX with USB Audio 2.0 was when the problems started. Some of the tested adapters would not work at all, others only with short cables, and only one adapter came close to the quality of the original. But as soon as 8-channel recording or 96 kHz playback were initiated, the Apple Kit always performed much better.

We also recommend the purchase of a dock-to-dock extension cable, to avoid having the CCK attached to the iPad directly with the heavy USB cable hanging down.

This can cause the CCK to slip out of the iPad's connector, or to be in the way most of the time. An extension cable provides enormous freedom of movement. We are working with cable lengths of 50 cm and 1 m, both work flawlessly. These cables are available as DeLock iPhone extension cable, or Dock Extender, e.g. from Amazon.


It is important to note that each individual component is responsible for stable operation of UCX and iPad. As an example, a setup with an iPad connected to a 1 m DeLock cable, CCK, 5 m USB connection to the UCX only worked with the original Apple CCK. Not only for simple iTunes stereo playback, but also with 96 kHz playback and 8-channel recording. In this setup, the USB cable could even be replaced with a 10 m active one. With lower quality cables or CCK replicas, even 50 cm dock to dock to 1 m USB would be considered success ...

On a Windows PC, Class Compliant mode is indicated by a missing "RME" in the device name shown in the Device Manager. In the correct mode and with installed drivers, the full name including RME is shown, without serial number. 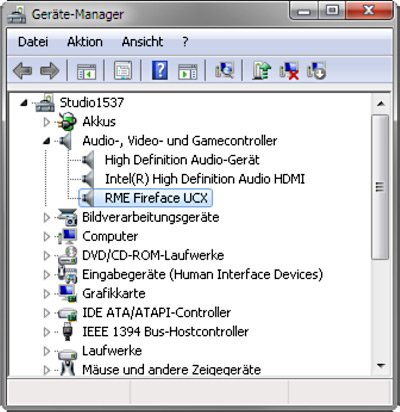 Mac OS X will show the UCX as "Fireface UCX (xxxxxxxx)" in the Audio-MIDI setup, offering a choice of 2-channel and 8-channel operation. 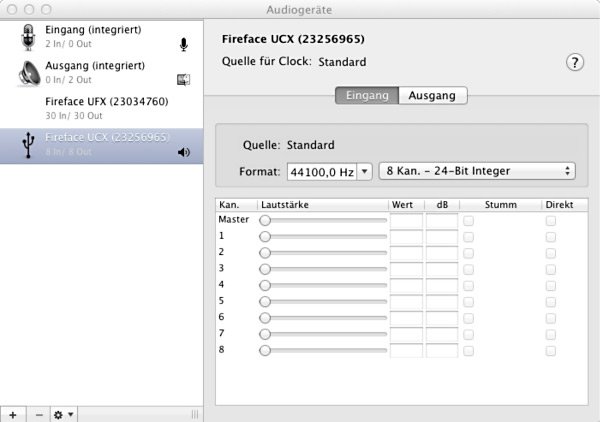 In Mac OS X, either the first two or the first eight channels will work, which means all analog channels in 8-channel mode. The output signal of channels 1/2 will be copied to outputs 7/8.

When connected to an iPad, the analog mic/line input 1 works with mono apps, inputs 1 and 2 with stereo apps (both dual mono and stereo), and all 8 analog inputs with the apps MultiTrack DAW and Music Studio. Playback will use the rear panel analog outputs 1 and 2 (there is no app supporting 8-channel playback at this time). The output signal 1/2 will be copied to outputs 7/8, SPDIF and ADAT, and can be processed independently (volume, EQ, dynamics, FX return).

The digital inputs are currently not operational. Not only will most apps not support more than two channels at this time, our tests have also shown digital synchronisation to be less than ideal in practice. Therefore, the use of these ports currently makes no sense in CC mode.

While the MIDI I/Os will send and receive Sysex messages, not all apps are ready to do this. For example MIDI Monitor and AC-7 do not support Sysex at this time. The app MIDI Tool Box can be used to verify that the UCX is working correctly, and the problem lies somewhere else.

The front panel operation is identical to the one under Windows and OS X, or standalone operation. The rotary encoder controls these parameters:

When used with the iPad all channels can be accessed in the display of the UCX. The values of the channels not listed can be changed, but this has no influence on CC operation.

- There is no second TotalMix row (no software playback channels), hence no individual routing or mixing of playback channels. These will always be connected straight to the physical outputs, except for the additional signal routing from 1/2 to 7/8, making the headphone output usable in stereo mode. Channels 1 and 2 are also sent to SPDIF, channels 1 to 8 to the ADAT output (mirroring).

- The input effects EQ/Dyn will always be active in the recording path.

Therefore the UCX is also a very powerful tool in CC mode, and can even be pre-configured via TotalMix FX under Windows/Mac. Apart from the current configuration, which will be preserved, the possibility of saving up to 6 configurations in the setup memory is very useful, allowing for a quick reconfiguration.

The input signal will pass through all activated functions of the TM FX input channel, namely settings, EQ, and Dynamics, and is then sent to the iPad. Like under Windows and Mac, the input fader controls direct monitoring to outputs 1/2 and 7/8. The FX send control for echo/reverb is also active.

As in normal TotalMix FX use, the options Stereo Width, MS Proc and Phase L/R are NOT within the recording path, but in the monitor path. This is technically determined and can not be changed.

With the mirroring of signals to SPDIF and ADAT outputs, the UCX features two simultaneously usable digital outputs, with independent processing (volume, EQ, Dyn, FX Return). IOS 5 on the iPad supports audio at up to 24 bit, 96 kHz. The available resolution depends on each individual application. We are currently not aware of an app that supports 96 kHz recording. Details on high-resolution playback are found in chapter 8, Hi-End Playback.

TotalMix FX can transfer all current settings to the device (Options/Store Current State into Device). There are six memory slots (Setups) available. An example:

In CC mode, the encoder in the SU - Level menu can switch between setups 1 and 2 at any time, alternating between entirely different configurations. Further examples would be activating reverb/echo, or temporary monitoring of the input signal. Very comfortable is the use of the Advanced Remote, as in CC mode its 6 upper buttons steer the Setups 1 to 6 directly.

Please consider that many settings are not accessible from the iPad or the device itself. For example if the UCX is to be used as vocal processor, the correct amount of reverb/echo, compression ratio, or EQ settings can not be changed during operation. To change the configuration, the unit must either be reconfigured in normal mode with TotalMix FX, or a saved setup must be recalled.