CC Mode (class-compliant), The class-compliant products is possible to be used as the audio input and output devices for iPad by connecting the Apple iPad Camera Connection Kit and RME bundled USB cable. Therefore, in this article we will introduce you some iPad Apps we recommended .

※ Apps presented in this paper are being made to check the operation in the Fireface UCX actually, there is no intended to provide support, such as guarantees of individual behavior.

Some of Apple Developer (authors) has released several of App-based DAW for a simple stereo recording and Some iPad App which is recorded in multitrack are full-fledged presenting. We will introduce you here for the App which focusing on the premise that equipped with a certain level of quality with the Fireface UCX.

Most of Apps has been designed the Apps which is a standard that the User could be connect the microphone or line input to the iPad or iPhone, they are also intended to be used with an external audio device, such as Fureface UCX. Also, if the App is compatible with Core MIDI or MIDI (available from later iOS 4.2), it is also possible to use Fireface UCX as the MIDI interface of iPad.

IPad multi-track recorder for simultaneous recording * / 24 channel simultaneous playback of 48 channels is possible. Operability and functionality with a close to a computer-based DAW, you can use the Fireface UCX, 8 analog inputs and high-grade high-precision master clock by SteadyClock of UCX, 2 stereo output is available, the full-fledged iPad can monitor with stereo output for the multi-track recording and mixing. Not correspond to the soft synth or MIDI, it is the App that specializes in audio recording / mixing.

Turn your iPad to portrait orientation for 100mm long-throw faders controlling up to 48 mono or stereo tracks, each with two aux sends, and a PSP ChannelStrip with extensive EQ, expansion, compression and gating controls.

In addition, you can add up to 4 VST plug-ins to each channel. Fix a vocal with the included MuTune processor; do some frequency tweaking with the optional FabFilter Pro Q; or get an analog sheen with the optional PSP MicroWarmer.

On top of that are 8 subgroups, each of which can also accept 4 plug-ins. With full automation for both channel controls and plug-ins, Auria’s mixing power is unsurpassed on the iPad.

When recording, Auria lets you set input levels and choose to monitor tracks with or without effects. Punch in and out or loop record using the minutes and seconds, bars and beats, frames, or samples ruler. Set Auria to snap to bars and beats, events, cursor position, or grid, if you like.

Bring in audio from iTunes. Or sessions from Pro Tools, Nuendo, Logic, Digital Performer or other DAWs via AAF import. Zoom in for sample-accurate editing with cut, copy and paste. The optional Drumagog plug-in even lets you fine-tune your drum tracks.

The main function of the Auria:

※ I was able to test the simultaneous recording 48 kHz / 24 bit and 8-channel Fireface UCX with iPad 3, to record comfortably.

※ information posted is current as of August 2012. 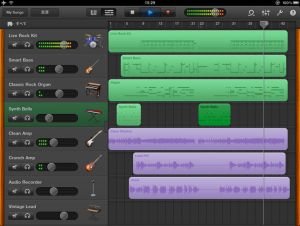 Arrange and mix your songs anywhere inspiration strikes using a powerful eight-track recording studio that can handle any combination of audio recordings, Touch Instruments, and loops.

We also support Core MIDI of course, it is also possible to connect a MIDI keyboard and the Fireface UCX, MIDI keyboard to play software instruments in GarageBand. Is a range of possible practical latency when playing well, it will also work on real-time performance on stage in addition to the production.

If you connect the Fireface UCX, input channel 1 - Input 1 + Input 2 or 8 (mono x 8), - (stereo x 4) are available but 7 + 8, multi-channel recording on the specifications of the App doesn't correspond to the (1, 1 stereo in mono) channels that can be recorded at the same time is expected to only one in a future update.

It is also a great attraction GarageBand by an intuitive user interface that can be operated simply without stress. You can assemble a phrase or rhythm simply by tapping the screen, it is very convenient when sketches and compose, as well as applications to note the idea. For inexpensive prices and US4.99.

※ There was also a scene or action challenging due to lack of processing power in the (original) iPad, I was able to use at least comfortable iPad 2.

Garage Band is a kind of reference directly from Apple. Many features, easy to use, USB stereo recording without problems, low latency. There is no recording in waveform/track view, and in spite of stereo recording, one is left staring at a single channel old-fashioned VU meter. It becomes clear in many places that this is not a small Logic version.

Interestingly Garage Band is already prepared for more than 2 channels at the input. Connecting the UCX 8 mono channels and 4 stereo channels are shown as selectable input sources. Unfortunately the selection above 1/2 is not functional at this time.

At the time of testing (November/December 2011), a number of interesting and professional apps exist, which allow the use of the UCX with an iPad not as a mere toy, but as a serious alternative for mobile recording or music production. A non-representative overview with subjective comments and hints follows.

Available apps can be coarsely classified into the following categories:

Multitracker: Software that can handle more than two audio tracks

MIDI Sequencer: DAWs with none or limited audio recording features

Thanks to iTunes and AirPlay, music playback is one of the main fields of use of the iPad. For the best possible listening experience, it takes more than just that - uncompressed audio formats, 24 bit resolution, or up to 96 kHz sample rate. iTunes and iOS are on the right path internally. Thanks to the UCX' digital outputs, it can be shown that uncompressed playback data are passed on unaltered, i.e. without resampling, and at the full 24 bit resolution.

Unfortunately, iTunes refuses to import audio files with sample rates beyond 48 kHz into the media library - making it impossible to play such files in iTunes. On the other hand, iOS has supported 96 kHz audio since version 4. Programs like FLAC player andGolden Ear already play 24/96 files with available Class Compliant USB stereo DA converters, bit transparent and without resampling, in full resolution. Even the player contained in File Browser (a commendable file manager) is able to play such files with full resolution, as again can be proven with the digital outputs on the UCX.

The class-compliant products adds another special feature in this context. Instead of using the jitter-prone USB clock, it works with its own internal SteadyClock. Many USB audio devices extract clock for DA conversion from the USB data packets, running in slave mode (adaptive mode), with comparably high jitter values, especially since most won't offer active jitter suppression. The UCX works in clock mode master (asynchronous mode), both during recording and playback, thus achieving the exact same sound quality with an iPad as under Windows and Mac OSX.

A surprising number of apps allow high quality recording from the analog inputs. They will automatically detect and use the unit's inputs and outputs. Many of these are found in the Dictaphone category. Unfortunately these often record only compressed or with less than 44 kHz sample rate. Or fail in the detection of the UCX 8-channel hardware (only channel 1 can be used). Therefore we removed the details of these apps (Recorder Plus, Recorder Pro etc.), although some are quite interesting. For example Pocket WavePad HD is the only app that we found which can record uncompressed with 16, 24 and 32 bit resolution, but will detect only one channel...

For real high quality stereo recording and support for USB Audio, only the iphone apps Blue FiRe, FiRe2 (from the same manufacturer) and iProRecorder were found. Blue FiRe and iProRecorder record in 44.1 kHz, FiRe 2 in 48 kHz. All three are limited to a disappointing 16 bit resolution. The older Blue FiRe is unable to record in the background, which essentially disqualifies it. iProRecorder disappointed with many more issues, so a real recommendation for a serious pro tool can not be made at this time.

Typical iPad multitrackers often simulate old multichannel tape machines or cassette recorders. Unfortunately this often means they turn out to be practically unsuitable even for semi-professional purposes. Overdub falls into this category, a cute and affectionate realization with real blaster operating sounds and an R/P head as cursor, but unfortunately only allowing mono recording.

n-Track Studio can record several tracks in sequence and play them back simultaneously. There is monitoring, too. Overall performance, stability and latency were all below our expectations, though.

Hokusai is initially free and works quite stable, but also slow. Its main problem is that even after purchasing the full pro pack you do not get what you expect in a real multitracker (mute and solo per track, a mixing desk, a usable transport console...).

The king of multitracking on the iPad could be Meteor. It has a lot to offer, including many nicely made tutorials, a nice overall design and tons of interesting and useful features. Meteor just started to support MIDI and become a full fledged DAW, that's why we still list it here. Just looking at multitrack recording there are some issues and aspects that need quick improvement. As Meteor gets frequent updates we are sure this will be taken care of. Overall Meteor has lots of features and performance to offer, much more than you expect for 15 Euros. 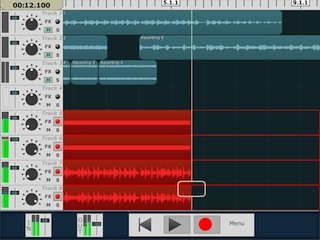 MultiTrack DAW from HarmonicDog might deter potential users with its old-fashioned design at first. Also, there is no free Lite version. It takes courage to spend 8 € for the smallest 8-channel version just based on the screenshots in the App Store. But the description of the app already lists features that should be taken for granted - but are missing in all other tested apps:

- Auto Input - allows monitoring the track underneath until punch points

These are either not available in other apps at all, or only as additional, costly in-app purchase. The MultiTrack DAW works flawlessly in practice. It works very smoothly (claimed to be due to assembler code manually optimized for the iPad's Arm processor), features low latency, and did not crash once during testing. It is also the only 'bigger' app within this survey that will continue recording in the background - definitely an important factor in terms of safety. The well-implemented touch screen operation also doesn't fail to please, although it can be unnecessarily cumbersome in some cases. The program is easy to use and does not even require a manual. Apparently, this is the app to beat in terms of multitracking without MIDI.

Additionally, MultiTrack DAW currently is (besides Music Studio) the only app realizing simultaneous recording of up to 8 channels. Thanks to its good performance this is even possible while up to 16 channels are played back - mixed down as stereo signal, of course. The author currently works on supporting 24 bit. 96 kHz and real 8 channel playback are considered - sounds promising! 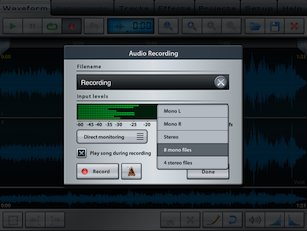 Music Studio is most probably the currently most sophisticated and complex DAW app in the store (free Lite version). Alexander Gross from Austria has created a powerful software almost unnoticed here, whose range of features and included sounds allow a comparison with Logic and Cubase. The record/playback section of the app is also well done. In comparison MultiTrack DAW has a higher performance, Auto Monitor, and recording directly within the tracks view. Music Studio on the other hand comes with a full screen wave editor. Since the latest version 2.04 Music Studio can now record up to 8 channels simultaneously with the UCX, as 4 x stereo or 8 x mono. The overall package plus support for more than stereo currently makes Music Studio the number 1 DAW in the app store. And the price is so low you won't believe it (11 €).

The very similar FL Studio Mobile is indeed from the same author. It doesn't include audio recorder and editor, therefore is excluded here.

Meteor - see above under Multitracking.